Wow, it’s been more than a month since I’ve graced you with my web presence, and truthfully it’s now been more than a month since I’ve been in the ocean (well unless you count the many times I’ve been swimming in it lately, but really it does not compare). Life has been busy, I went home and visited my Mom, traveled up to Mammoth to hike and bike with my friend Amy, worked in the scuba shop, have done some pool teaching days,  been making cakes and running around training for my next triathlon. So again, Constant Reader (there’s at least one of you checking each day and yes I stole that phrase from Stephen King) sorry for my absence from the internets. I promise I’ll be back enforce soon. Summer is coming, which means hopefully the return of AMPM diving… I just need my dive buddy’s knee to heal! 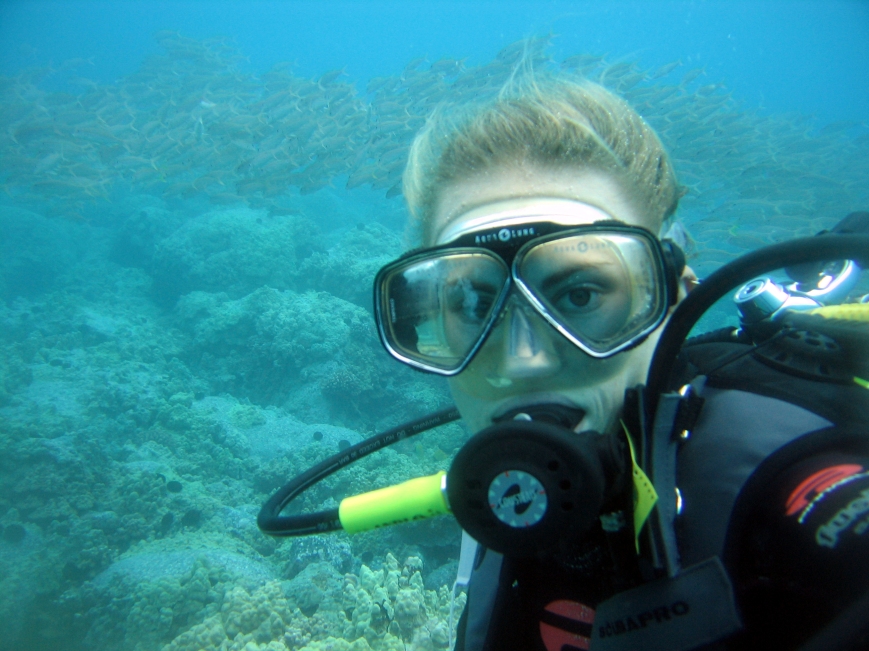 However, in the mean time here’s a blast from the past. Its the most solid influence for why I am here today, teaching, shooting pictures and truly loving the underwater world. In 2006, three years after getting my first taste of diving before returning to the dry wasteland of the Tucson desert (well not true, the Sonoran Desert is really, really beautiful), I found an internship out in Hawaii that would a) get me diving again, and b) allow me to practice and learn more about shooting underwater. Immediately I contacted them, and applied. I was accepted (only after I assured them that my knowledge of video and editing (I was a film major after all) would not give me a chip on my shoulder, and I would be eager to learn their process and practices. In addition I applied for a scholarship offered through the Media Arts College and received one, getting almost everything but the airfare covered (my amazing parents covered the rest). Let me re-phrase this… I was able to get my school to pay for me to go diving. I was stoked.

At the end of June I traveled to Hawaii, fitted with a new set of gear (some borrowed from my Uncle, some newly purchased…his gift to me, as he loves diving and was excited to see me getting involved more with it). I met up with Martina and Jim, the owners of Dolphin Dreams Images. Jim is a professional underwater photographer and videographer, who has had images and videos in many different magazines and assisted with several national geographic and other video shoots in Hawaii. Their primary business though is to film tourists on the popular Manta Ray night dives and Dolphin Ohana snorkel adventures. They sell the DVDs and photos to divers, and we the interns assist them with every facet of the operation. During the trip I would earn my Advanced Open Water certification, as well as Nitrox and a Manta Ray Diver specialty. I learned a TON about Manta Rays through giving the Manta Eco talk at the Sheraton some evenings, a trade in which we gave the talk to hotel guests who would come out to watch the mantas dance gracefully near the surface, swooping in and out of the beam from the large light they have shooting into the water to attract plankton (which then attracts the rays). In return we were allowed to use their shallow pool to offer intro to scuba to anyone interested. This was my first experience in a teaching situation, and I found I loved it. Those few days in the pool are really what put the idea of pursuing scuba into my mind. 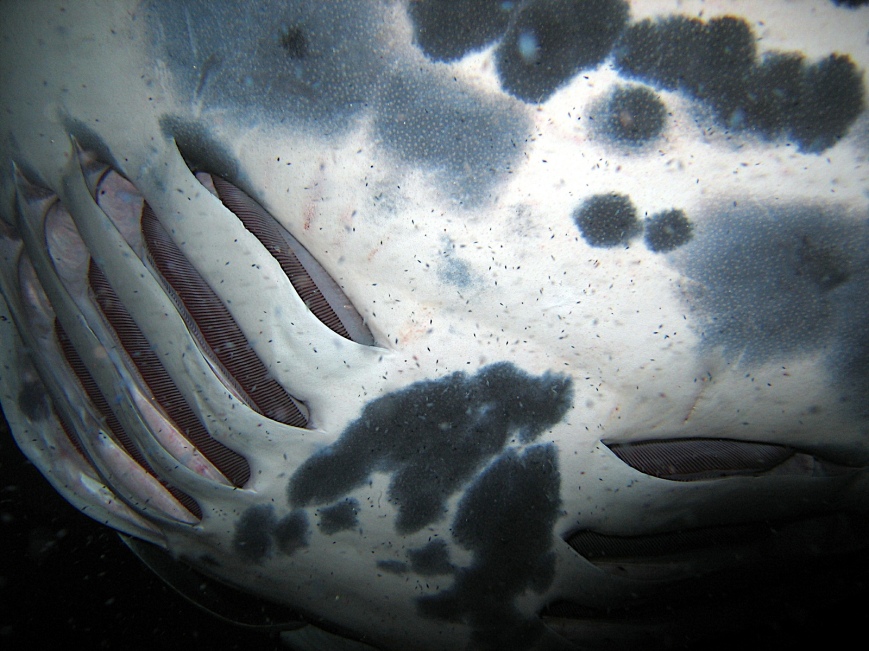 In the evenings we assisted with all the scuba and camera gear set up, and would drive this ancient and awesome old suv down to the boat, and assist with getting the gear loaded and ready to go. If we were diving with them that night, we’d stick around. If not, we’d head into town and grab some food, the return to give the Manta talk. On days that we were diving, we would get to experience the dive just like the normal tourists, or sometimes even help out with the video duties. I remember the first night that Martina asked me to lead. Its a simple out and back dive, but I was SO nervous. It was night, pitch black and I’d never lead a dive before…surprisingly we all survived. One evening at the north site (by the airport…Garden Eel Cove (by day), we had 17 manta rays show up. It was insanity, Mantas were everywhere. The line up was: Alexander, Doug, Timbuktu, Knight, Big Bertha (who was pregnant and is the largest one they know of at 16ft), Lefty, Rebekah, Isabel, Wyland, Who Ray, X-Ray, Cousteau, Curly, Sugar Ray, Kaulani, Bob-n-Ray and Miki. This was definitely the best dive of the trip, and is a dive that I will remember forever. 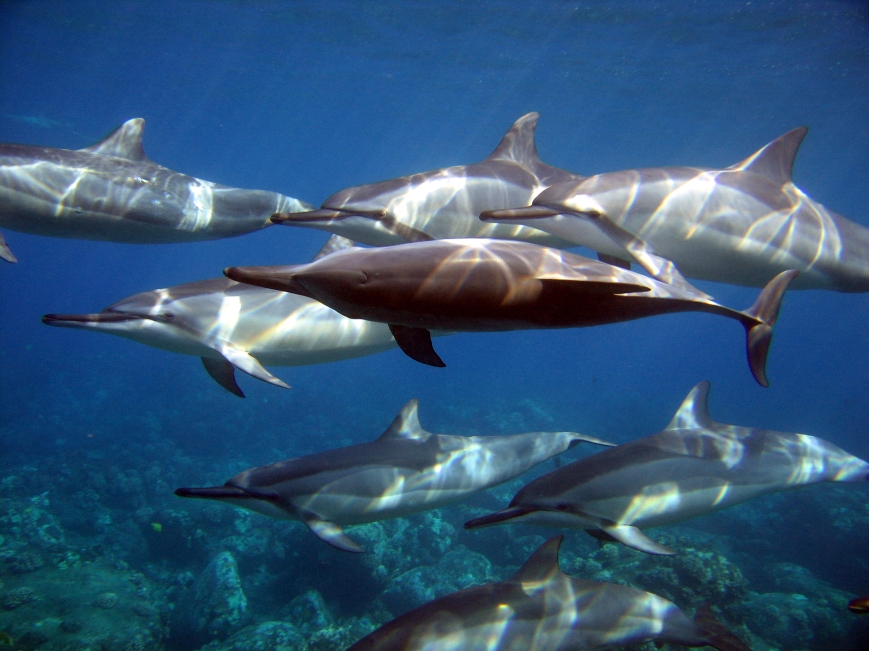 Late at night after the Manta we’d digitize the tapes, and edit the dive down into a nice video with music to be mailed out or delivered to the hotel of the folks who purchased a DVD. In the mornings, when we went out of the Dolphin Ohana, a snorkeling adventure that caught up with the pod of dolphins slowly cruising back to a large bay after a night of hunting. They would chill and swim around in the bay, half awake while dozens of snorkelers got an up close view of the animals that many people only see in theme parks. 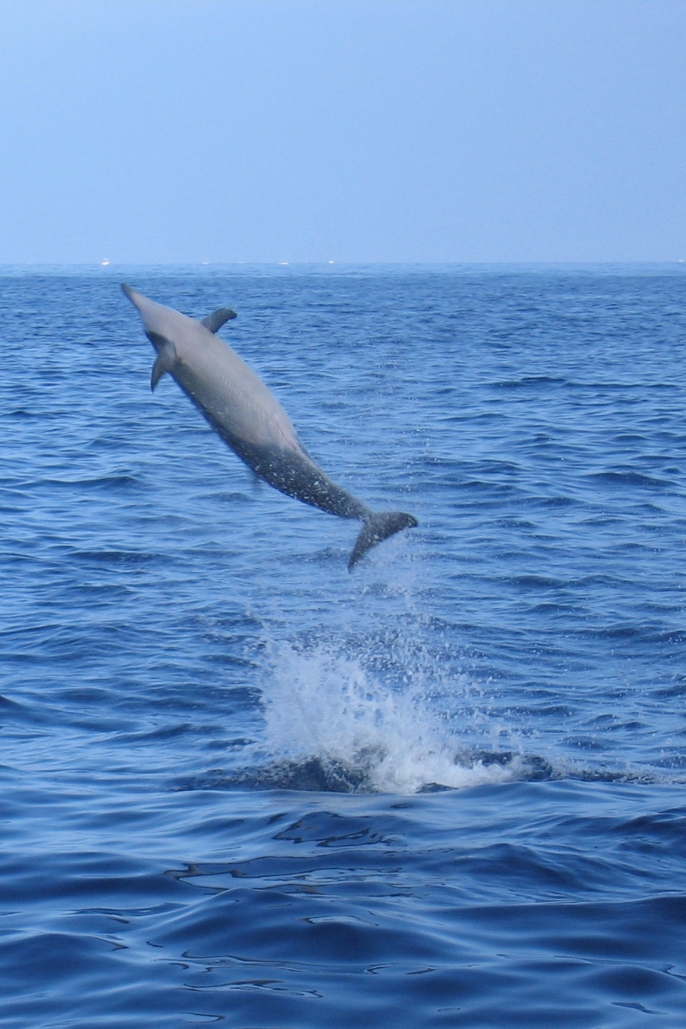 Again, we assisted with any gear, helped out on the boat, and talked with the customers, assisting them if needed. After just like at night, we’d set up a small TV so that they could see the video as they left the boat, and could purchase a DVD or pictures that we would be editing that afternoon once we got back to the boat.

In addition to all my intern duties, we had chances to go diving for fun from the beach, and a couple of times out on the boat of one of the folks that Martina and Jim know and work with. I got to explore all over the Kona area, going into and making it out of several awesome lava tubes, hunting octopus and eels and other elusive creatures that hide out in the coral. We had days off where we could go into town and shop, relax, hang out at the beach, do just about anything we wanted… 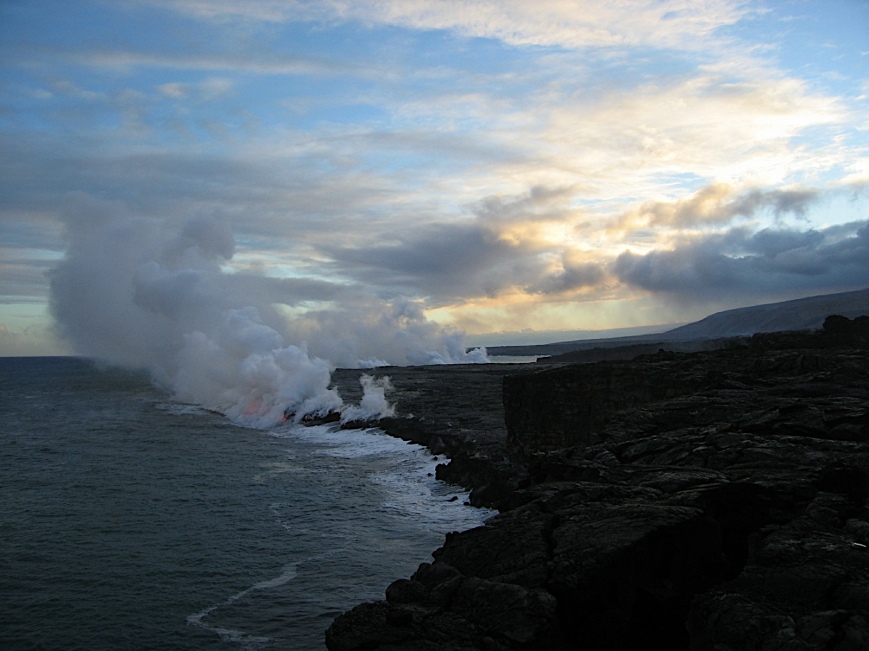 Two of my weekends out there I was able to take off with some of the other interns and explore. On one occasion we rented a jeep and drove around the entire big island, stopping at the black sand beaches, hiking out along lava beds to where the Volcano is currently erupting (this was an adventure in itself as we didn’t plan and ended up hiking in flip flops, with no water or flashlights for the nighttime return back…and FYI lava is sharp!). We slept in the jeep when we discovered the campground was full, the showered in a cool river in the jungle like flora of Hilo before nearly tipping the jeep off a cliff as we traveled tiny single track roads to nowhere. We watched surfers on the beach, and drove through a crazy rainstorm before we emerged on the back side of the Big Island. Continuing around we found our planned campsite had been “bought out” for a family reunion, so once again, we found a deserted area and slept in the car.

We spent the day on pristine beaches snorkeling and napping, before driving back into Kona to return the jeep and go back to interning in paradise.

On the other weekend I flew over to Oahu. We stopped at Pearl Harbor, but missed the chance to get over to the USS Arizona. From there we wandered Waikiki, then the next morning drove across the small island for a shark encounter, a snorkel adventure in a cage with sharks swimming all around. It was AMAZING. From there we continued our exploration of Oahu by taking the scenic route and driving the coast around, stopping at a variety of beaches and locations until we got back to Honolulu and the airport to fly “home” to the Big Island. 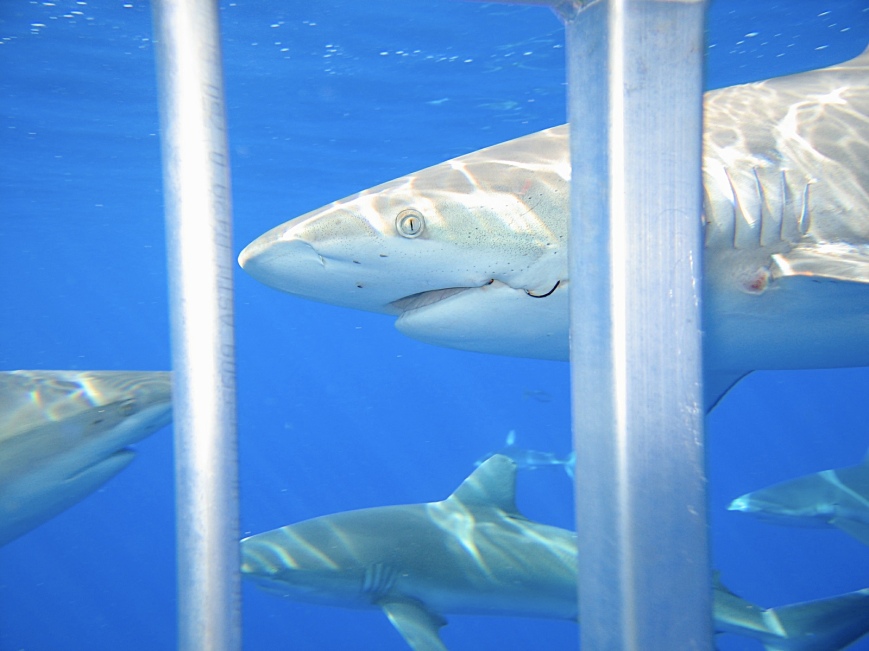 All in all this internship was one of the best experiences of my life, and I would definitely say is was a big influence into my decision to pursue a profession with scuba. Enjoy the slideshow below of many of my pictures from the trip! If you want to read more in detail, I kept a little blog/journal of the trip, updating each day: http://billytheplatypus.blogspot.com/ (the last post is first, so click on the archives and start with the oldest entry to follow in succession…)

I’ve been quiet for a couple weeks I know! Its been hard not being able to catch everyone up on my latest diving adventures, because I HAVE been diving. I’ve been working, diving, studying, starting the IDC, working on a project, trying to sneak in some exercise, and when I have the time catching a few zzzz’s. Needless to say, there hasn’t been anytime amidst my crazy schedule at the moment to sit down and detail my underwater follies or go through my many gigs of video from our Catalina Adventure in June. However, I don’t want to leave you all hanging, checking my little blog my few constant readers, and sighing as the same old post from the beginning of the month fills your screen. So, while I have a few quick seconds here at work I’ll throw some good old picture your way. These images are some of my favorites from a 5 week long internship I participated in back in 2006 on the Big Island, Hawaii. During this internship I earned my Advanced Open Water and got an inside look at how a small scuba related business is run. Martina and James Wing work out of Kona, filming and photographing underwater adventures such as the nighttime Manta Ray dives and the morning Dolphin Ohana snorkels and sell them to the days participants. They also are both instructors, offering lessons and guided dives. In addition to advancing my scuba experience I had numerous changes to practice both video and photography underwater, and over the course of five weeks came away with some great shots, despite only having a small point and shoot camera. I hope you enjoy, and after this weekend my schedule should lighten, as the main project that has been eating my time and keeping up to the wee hours of the morning will be finished.

If you’re interested in a bit more reading, I chronicled my internship here: Hawaiian Internship

I have many other great pictures from my internship, if you’re interested in checking them out, go here: Hawaii Internship Pics

Enjoy, and hopefully soon I’ll be catching you up on all my current California adventures!